Gino’s East has been a Chicago pizza staple since 1966. And with two convenient downtown Windy City locations, it’s easy to get your deep-dish fix after shopping on the Magnificent Mile or a long day at one of the great museums.

On a recent weekend in Chicago, my husband and I (usually devoted Lou Malnati’s diners) decided to go out of our pizza comfort zone and try another version of the classic deep-dish pizza. We were staying fairly close at the lovely Hotel Allegro and walked about a half-mile to the restaurant on the corner of Ontario and Wells Streets. 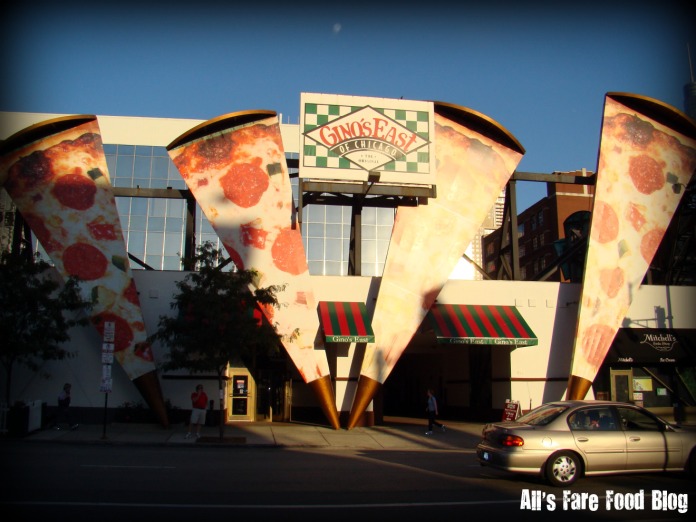 Just west of Michigan Ave. and near Ed Debevic’s, Hard Rock Cafe and Rainforest Cafe, the Ontario Street Gino’s East is huge. After you enter the revolving doors, you’re transported to a gigantic restaurant space. There’s a bar area to the right of the entrance and then the main dining area. The dining area is dark with wood booths and tables. Celebrity-signed pictures line the walls – everyone from Britney Spears to the cast of “The Sopranos” has made their mark. 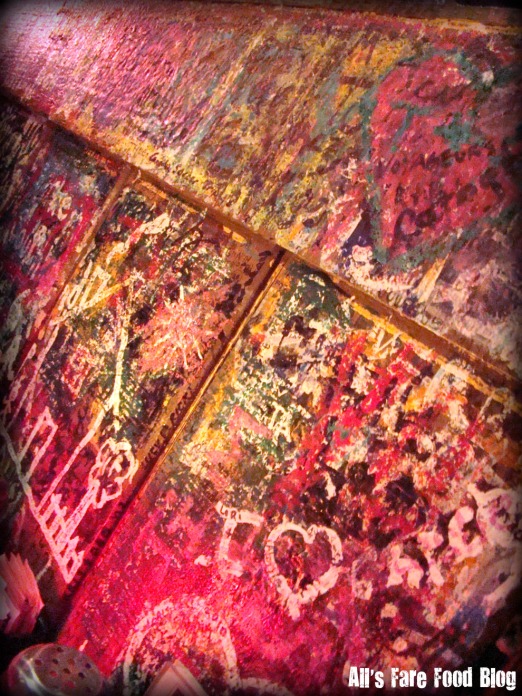 Layers upon layers of doodles and signatures from generations of diners cover the walls and surfaces of the restaurant. There are a few off-limit places where you can’t leave your mark such as the mirror in the bathroom. Staff have kindly put signs up to let you know what’s forbidden.

We were seated at a very small booth for two. Our red vinyl seats had seen their fair share of people throughout the years. I could feel springs poking me. Not the comfiest place to be when you know you have to wait almost an hour for your pizza to arrive.

The menu has the typical Chicago pizza place staples – deep dish and thin crust varieties, pasta, salads, apps and a kid’s menu. Click the above to download Gino’s East’s menu. 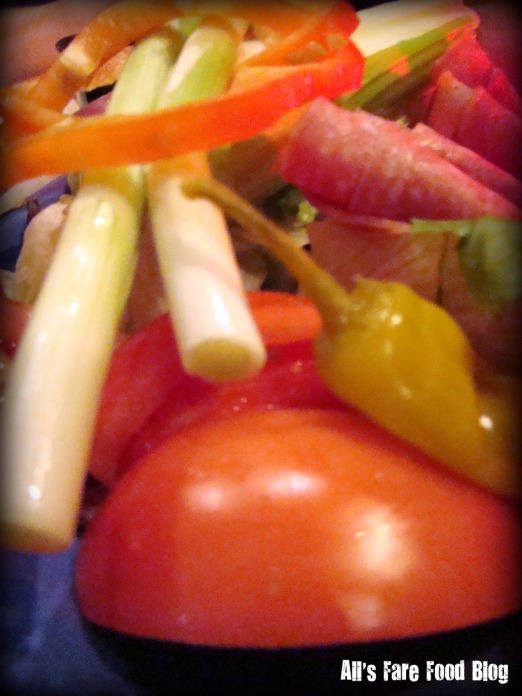 Hungry from a long train ride delay we opted to start with the antipasto platter. A huge platter of lettuce, tomatoes, provolone cheese, ham, salami, onions, carrots, celery and housemade vinaigrette dressing, the platter was a glorified salad. But, it was a nice start. Plus, it actually came out cheaper to order the antipasto platter for two people at $8.95 instead of ordering the family-style salad at $4.75 per person. We each ended up getting two plates of salad plus a little leftover. The dressing was really good, too!

Finally, our pizza made it out. We ordered the traditional deep-dish with cheese and sausage.

The Gino’s sauce is chunky and made with vine-ripened tomatoes. It’s not overly seasoned or spicy. Same goes for the sausage. It didn’t have the bits of fennel seed that makes Lou Malnati’s my favorite. You also have your option of ordering sausage chunks or a sausage slab. We opted for the sausage slab. Who wouldn’t want a piece of sausage the size of a hubcap?

The cheese was stringy and gooey. The crust was buttery and flaky, but not overly dense. It stood up to the wealth of ingredients stuffed inside.

Pizzas are served in well-seasoned pans. We ordered the small, which turned out to be two slices per person. More than enough to stuff us. The walk down Michigan Ave. after helped get rid of the overly stuffed feeling. The couple next to us ordered two mediums (eight slices each) and went home with several boxes.

While Gino’s East is a good solid pizza – much better than the chain version of Pizzeria Uno – I still have to rank my Chicago deep-dish pizzas as 1. Lou Malnati’s 2. Pizzeria Uno/Due 3. Gino’s East 4. Giordano’s.

Also, check back to All’s Fare, we’ll be featuring more of our Chicago foodie tour in the next few days including trips to Ghirardelli, Yolk, Garrett’s Popcorn and House of Blues.