Editor’s Note: This post is featured on the Disney Blog Carnival #38. Read more great posts about all things Disney!

It’s been more than a decade since I’ve had a meal at the Sci-Fi Dine-in Theater at Disney’s Hollywood Studios. Back during my awkward teen years, I reveled in the chance to watch old, science fiction and horror B-movies thanks to Comedy Central’s “MST 3000.” At the Sci-Fi Dine-in Theater, movie buffs and science fiction geeks will enjoy the opportunity to see clips from vintage classics like “Attack of the 50-Foot Woman” or “The Giant Gila Monster.” Today’s teens will probably find the restaurant out-of-date, nerdy and totally not cool.

Since I don’t fit in that latter category and I still enjoy my science fiction every now and again (yes, I did go to a Star Trek convention in eighth grade), I still find this restaurant to be a fun draw even with its short reel of movie clips and vintage news stories, small tables and minimal menu.

Let’s take a look at what has changed in the more than 10 years since I’ve been back to Sci-Fi (and what hasn’t): 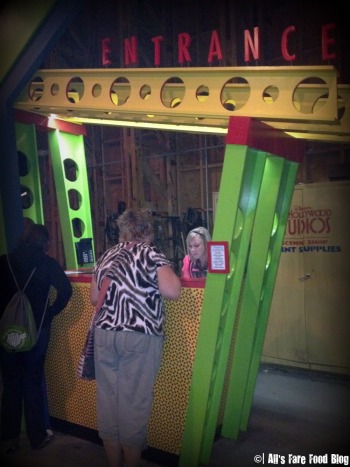 As you enter the restaurant under the neon lights circa old movie theaters of the 1950s, you’re whisked onto a soundstage. No hints of the “theater” portion of your meal experience are evident yet, except for a few movie posters from the era. 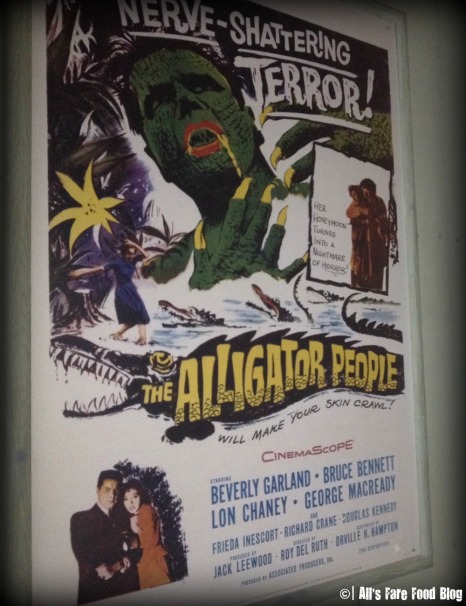 Take some time to look at the vintage movie posters (like this one above from “The Alligator People” starring Lon Chaney). If you look closely along some of the metal beams in the waiting area, you’ll find something my father-in-law found extremely funny. A glass bowl full of eye balls!

Once your party is called to be seated, you’re taken into the dining area. It comes complete with a starry, night sky; massive movie screen playing aforementioned movie clips (it’s about a 50-minute reel, so you’re bound to see part of it twice) and classic cars decked out as booths or tables.

All of the tables face the movie screen so no matter where you sit, you’ll have an unobstructed view. And, just as if you were at a real drive-in movie theater, there are speakers attached to the cars (unfortunately, you can’t turn the volume down).

Most of the car tables are composed of three rows that each seat two people. Let me tell you this: They are tight! You don’t get much table space or seat space for that matter (something I didn’t really remember when I was an adolescent.) Unfortunately, if you’re on the taller or even more rotund side, you might find these tables uncomfortable. I suggest asking for one of the “picnic”-style tables in the rear of the restaurant. 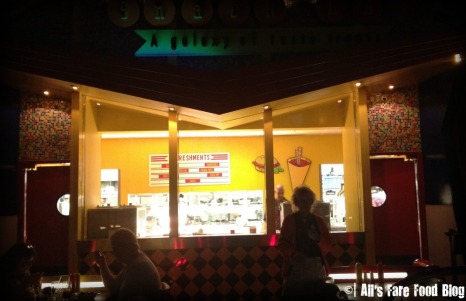 The restaurant’s kitchen has a facade to make it look like the drive-in theater’s snack bar. (I apologize for some of the pictures, due to the low light levels – it is always dusk in here – it was hard to capture some photos well.)

The cars are all very detailed down to the ketchup or mustard-colored paint jobs, head lights and even vinyl seats.

Each car even has its own license plate. I’d wager to bet that they each match up to a Disney Imagineer’s initials and birthdate, but don’t take my word on that.

There are a few tables in the back (looking like picnic tables) that provide you with a more traditional dining experience, not to mention more room on the table itself. 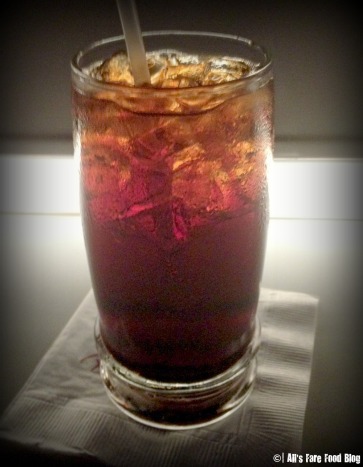 Now, to the eats! One of the best things about the Sci-Fi Dine-in Theater is their drink menu. If you’re a real Cherry Coke fan, no not the one you can just get in the machine. I mean the one where they take fountain coke and add cherry syrup to it, then you’ll be in heaven here. Plus, you can get free refills! They also do vanilla flavoring.

The towering milk shakes at the restaurant come in a variety of flavors – chocolate, vanilla, strawberry and Oreo. This one (above) that Brett ordered was really thick! 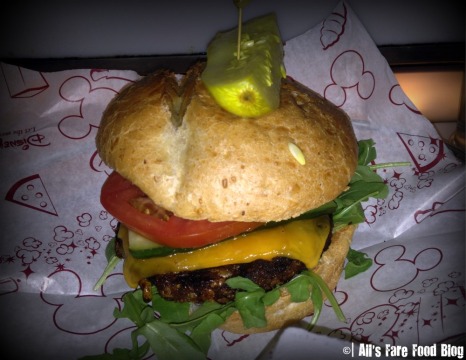 The menu is pretty standard – burgers, sandwiches, pastas, soups and salads. Above is the veggie burger that I had.

The toppings on the veggie burger were a fortress of mixed greens and veggies. There was nearly a quarter of a fresh onion; plus cucumber, tomatoes, pickle and cheese on top a toasted bun with some balsamic vinegar.

The veggie burger comes with your choice of a salad or sweet potato fries. I opted for the latter, which were really good – nice and sweet and very crunchy on the outside. The only problem was that they didn’t come out with my sandwich, it took about another 20 minutes for these to arrive.

Brett ordered the Reuben. Now, before I get into the sandwich details, this reminds of the first and only other time I’ve been to the Sci-Fi Dine-in Theater. I was about 13 and my brother John had taken me for lunch. I ordered an entrée fruit salad (sadly, no longer on the menu.) When our meals came out, they brought me a Reuben. To which I replied, “Who’s Reuben?”

I didn’t understand that a Reuben is a sandwich, not just a person’s name. To this day, whenever I see a Reuben or order one (I now know they are quite tasty!), I think of this funny story from my teen years but I digress, back to B’s sandwich.

The Reuben comes with a heaping helping of corned beef, sauerkraut and Thousand Island dressing atop toasted marble rye bread. It’s served with french fries and a pickle spear.

Overall, the ambience at Disney’s Sci-Fi Dine-in Theater is what you’re paying for. The menu, while it has all the staples of American cuisine, lacks any real character to make it wallet-friendly. If you’re watching your budget, I’d skip the meal here and try one of the counter service spots. Then, drop in just to take a peek at the restaurant’s ambience.

With that, I leave you with a little clip of the movie real from the restaurant. Beware! “The Giant Gila Monster!!”