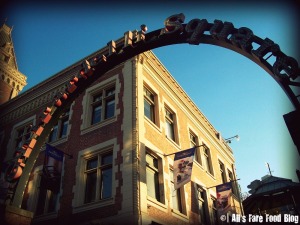 No trip to San Francisco is complete without taking a few nibbles of chocolate from those chocolate dream-makers at Ghirardelli. However, Ghirardelli isn’t just one store. It’s an entire square just steps from the Bay City’s waterfront, overlooking the Golden Gate Bridge and Alcatraz.

I have never been to SF before so when I found I’d have a little free-time after a work conference, I had to make the most of it. Trolley ride, dim sum and a stroll through Chinatown, and a famous Ghirardelli hot fudge sundae straight from the source.

I’m no stranger to Ghirardelli’s decadent treats. I’ve enjoyed their sundaes already at their locations at Downtown Disney in Walt Disney World and on the Miracle Mile in Chicago. Ghirardelli’s sundaes are special because they 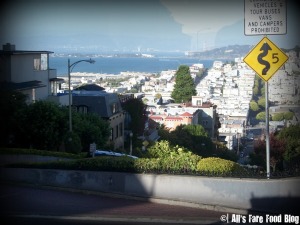 make their own hot fudge and you can select milk or dark chocolate. The result is a dessert that will have you licking up every last morsel of fudgy goodness.

After being coaxed into a little second story restaurant in Chinatown and enjoying a quiet, yet great dim sum meal, I took the old-fashioned cable cars down to the wharf area. Our trip took us past Lombard Street, the famous avenue with eight hairpin turns. The end of the Powell-Hyde Cable Car line is just a short, two-block walk to Ghirardelli Square.

There wasn’t a cloud in the sky on the Sunday afternoon that I toured downtown San Francisco. Yet even in July, the air was brisk and, luckily, I brought a jacket with me. Still, the street entertainment and other tourists provided enough warmth and energy to keep my spirits bright.

Ghirardelli Square isn’t just home to Ghirardelli. You can find other restaurants and specialty shops there like Kara’s Cupcakes, owned by Kara Lind, who has been featured on Food Network’s “Cupcake Wars.” Pictured above is “Ghirardelli To Go,” a smaller shop that serves ice cream and chocolate treats on the lower plaza.

The buildings (like the Cocoa Building shown above) at Ghirardelli Square have been added to the National Registry of Historic Places.

The second of the three cafe locations is in the West Plaza near Cellar 360. This one is larger than the “To-Go” locale, but it lacked the vibe of the main cafe. 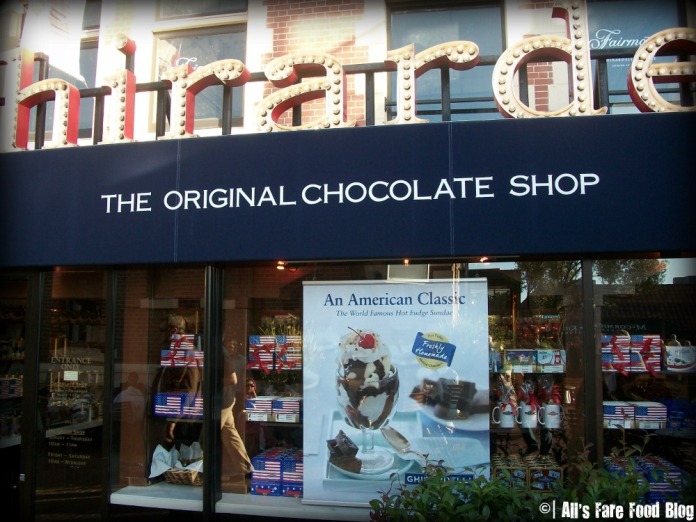 The flagship chocolate shop is smallish but the walls are covered in nearly every flavor and type of chocolate that you could imagine. Staff hand out free samples as you walk in the door and you’re mesmerized by the fabulous, warm aroma of cocoa.

There are so many treats in the store that it was practically impossible to take photos of them all, but here are some of my favorites like the chocolate-covered strawberries. There was also a really cute teddy bear in a Ghirardelli T-shirt holding a mini-box of chocolates, plus fudge squares and hot cocoa mix. (Yes, I went home with a suitcase full of chocolate. Don’t judge me.)

You could also indulge in the “Masterpiece Collection,” a box of truffles, turtles and other chocolate-covered delights.

Ghirardelli takes advantage of being in San Francisco and having some iconic images to sell their wares – like these cable cars filled with chocolate squares.

On the other side of the large building is the cafe. With seating inside and on a patio, the cafe was roaring with excitement on two floors (there’s additional seating and another store upstairs.)

As you walk in further to the cafe, the smell of chocolate overwhelms you. Plus, you can watch employees make chocolate-covered waffle cones (Oh, the flashbacks to Cold Stone. At least these people don’t have to sing for tips.) 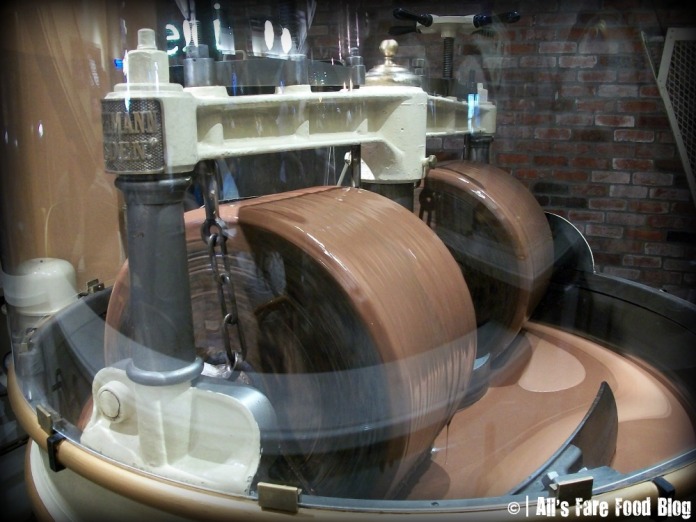 This contraption shown above is called a melanger. The large granite rollers are used to mix chocolate liquor with cocoa, sugar, butter and vanilla. 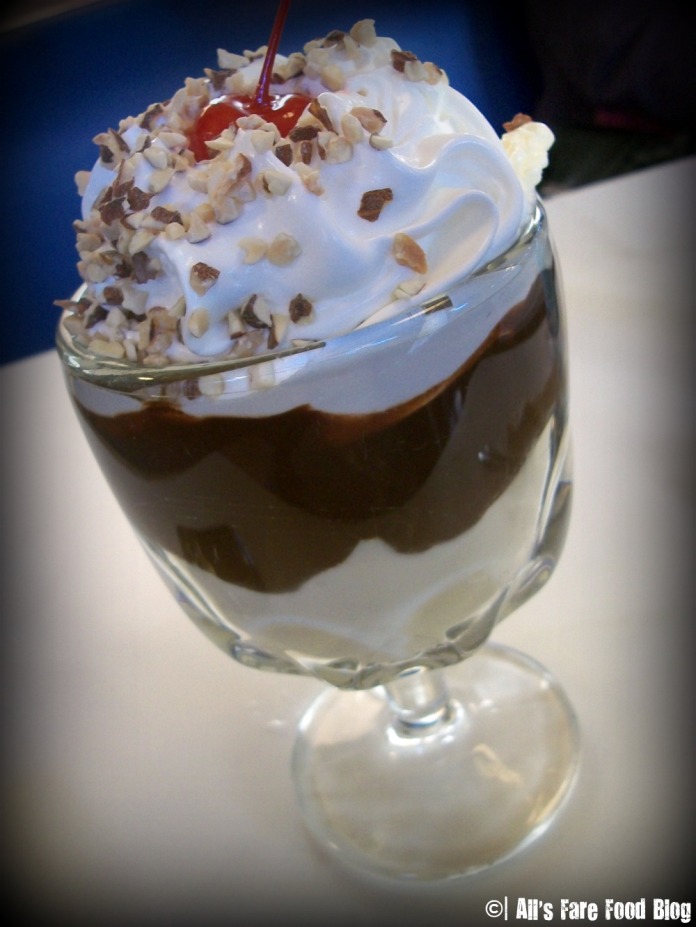 Hot fudge sundae at Ghirardelli, check. Two scoops of vanilla ice cream topped with dark chocolate hot fudge, whipped cream, cherry and nuts. It was way too much to eat for one person alone but I took one for the team. 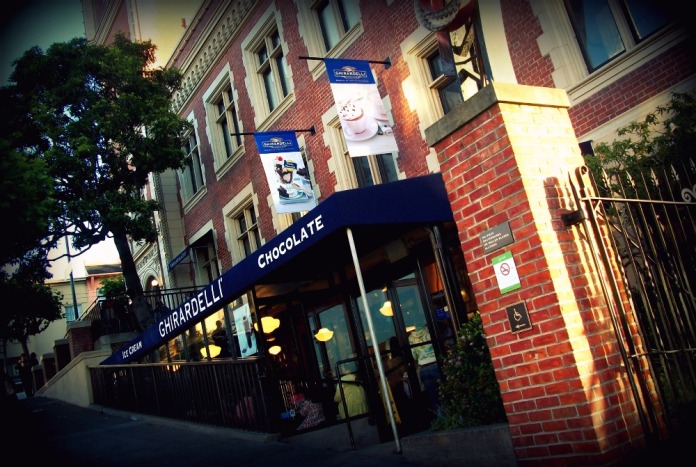 A few people braved the outdoor seating on the chilly evening.

I wish I could’ve seen what Ghirardelli Square looks like at night. The white lights on all of the signage reminds me of what I imagine the Chicago World’s Fair looked like in the late 1800s. 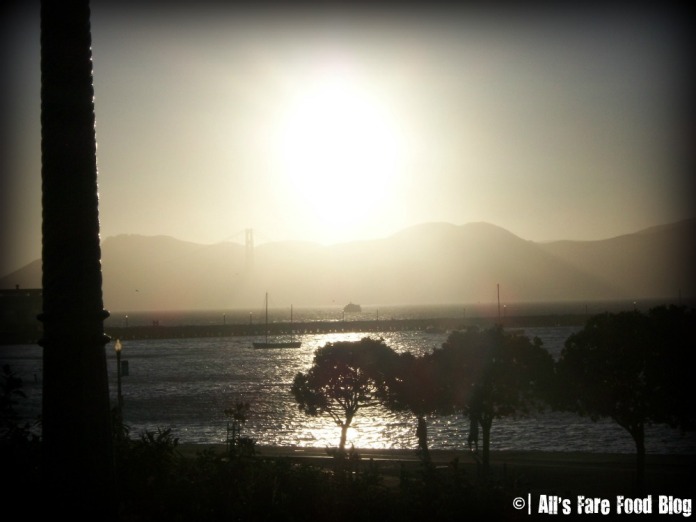 Good night, San Francisco. I hope to be back to see you soon!