Nestled beneath the shade of towering trees at Disney’s newest theme park – Animal Kingdom – is Flame Tree Barbecue, a Disney fan favorite when it comes to quick service meals in the parks.

You can find FTBBQ on Discovery Island (think: the Main Street USA of Animal Kingdom) and on the way to Dinoland USA. The entire eatery is colorful with a wild, animal theme. It’s a sensory overload, if you ask me. Seating is all outdoors, with some tables under cover.

Now, let’s take a peek at what’s on the menu…

END_OF_DOCUMENT_TOKEN_TO_BE_REPLACED 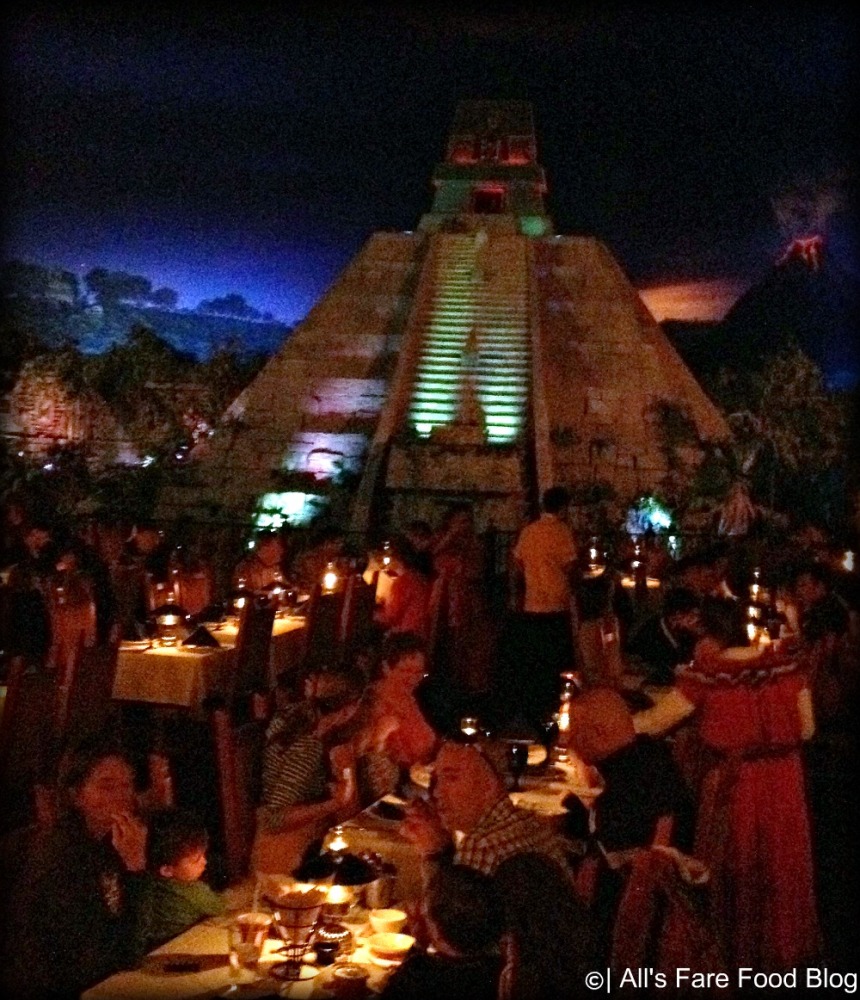 Today we welcome back my hubby Brett to give us his review of San Angel Inn inside the Mexico pavilion at Epcot.

Take it away, Brett!

One of the greatest places to visit at Epcot’s World Showcase is the Mexico pavilion. Compared to the other countries there is so much more to explore. You can take a ride on the Gran Fiesta Tour starring the Three Caballeros, buy goods in the marketplace and for the older folks in your party they can step off to the side and enjoy La Cava del Tequila where they can taste Mexican tequila and learn its history. One of the great treasures that we discovered on our last trip was the San Angel Inn.

The restaurant overlooks the inside pyramid and the boats that are taking the ride through the Fiesta Tour. A major plus is that we were able to get a reservation the day we dined, which as most people know can be a challenge at the restaurants at Disney World. One downfall is that anyone in your party that is hard of sight will have issues with the low lighting. I came in expecting the usual fare of tacos, burritos and enchiladas. What I came to find out is that Disney and their chefs know how to make Mexican food come to life!

END_OF_DOCUMENT_TOKEN_TO_BE_REPLACED

Editor’s Note: This post is featured as part of the Disney Blog Carnival No. 43. Check it out for more posts on all things Disney!

A stay at Disney’s Animal Kingdom Lodge Resort is a pure adventure as we found out on our most recent vacation. The sprawling hotel is full of amenities and jaw-dropping vistas of the resort’s own savanna. Waking up from a room here, is like waking up in the middle of Africa. You can find a giraffe outside your patio one morning and a herd of zebras on the next.

Animal Kingdom Lodge has several different spots to satiate those elephant-sized hunger pangs you work up after walking in the parks all day. There are the three sit-down restaurants – Jiko, Boma and Sanaa – plus the quick service eatery, The Mara.

Let’s take a closer look today at The Mara…

END_OF_DOCUMENT_TOKEN_TO_BE_REPLACED

We recently left our apartment in Salem, Mass., for a place in Beverly, Mass., just a few minutes north. As we were moving, I noticed The Scotty Dog – a little place serving up Chicago-style hot dogs.

This hot dog stand opened earlier in 2011 on scenic Route 1A. It has a handful of parking spots for car hop service, plus several picnic tables and Adirondack chairs.

END_OF_DOCUMENT_TOKEN_TO_BE_REPLACED

If I ever happen to be imprisoned for any reason in the near future, please let jail be like The Great Escape in Salem, Mass. This new eatery, which opened its doors in September 2010, gives Italian favorites a spectacular pardon.

Now through April 14, it’s Salem Restaurant Week. Participating restaurants like The Great Escape are offering three-course, prix-fixe meals for only $25. Some also have a two-course option for just $15. Who can beat those prices…and you get top notch cuisine in historic Salem.

The Great Escape is housed in what was once the country’s oldest active jail – built in 1813 and operating until 1991, a portion of the old building has been converted into apartment units (not sure if I’d want to live there.) And, while I’m sure there are some grisly stories from inmates’ stays in the jail, according to our waiter – Matthew – some of the restaurant’s staff do believe the building to be haunted. However, he doesn’t believe in those things.

The building is old brick and sits on the corner of Saint Peter Street and Bridge Street, right across from the Salem Depot Commuter Rail Station. Parking is the biggest issue in getting to the restaurant. We happened to find a short-term lot a block away behind the court house. But, with a lack of parking and rainy weather, the crowds weren’t piling into the restaurant – even with a cost-effective deal like Restaurant Week.