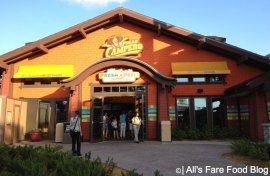 Seriously, it seems like it’s been decades since I was last at Disney World. In reality, it’s only been about two months since my brief little work-cation allowed me to drop by Downtown Disney and Epcot.

I flew into Orlando early in the day so I had the remaining hours to myself (as I didn’t have any work duties until the next morning). So, after checking into my (non)-Disney hotel near the airport, I took a little nap since the hot, humid Florida weather was such a drastic difference for me.

I decided to spend the rest of my day going to the Premium Outlet Mall, as I had heard that Disney runs a retail store there. I wanted to check it out so I drove on over. While there were some great deals on T-shirts and gear for the little Mickey-philes, nothing overly piqued my interest. After, I drove down Hotel Plaza Boulevard, a winding, tree-lined avenue that flows directly into the Marketplace at Downtown Disney.

There have been tons of changes at Downtown Disney within recent years – especially to its dining options. Most of the times, we don’t make it anywhere else but Earl of Sandwich and Ghirardelli. As I was on a limited diet (no dairy products) at this time, I opted to try the eats at one of DD’s newest establishments that took over the spot that once was the McDonald’s. Let’s take look inside Fresh-A-Peel at Pollo Campero... 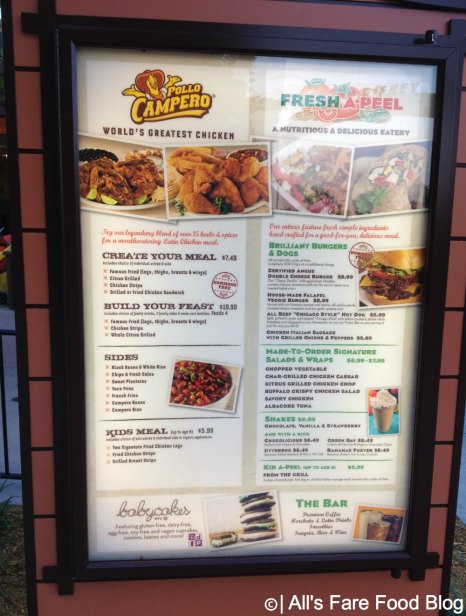 Opened in late 2010, this Dallas-based chain has restaurants in 15 states (including three in Massachusetts – who knew?!?) It’s known for its freshly made Latin-inspired chicken and sides, such as fried plantains, black beans and yucca fries.

However, unique to this Pollo Campero location is Fresh-A-Peel, a healthy alternative that dishes out salads, wraps and burgers. 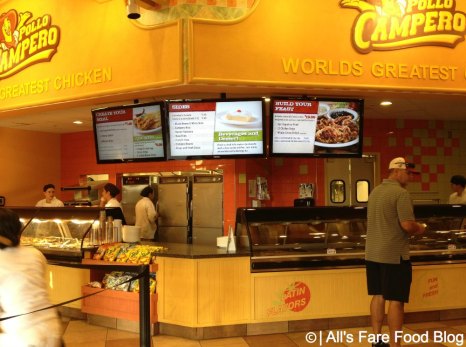 The interior space is a huge change from the McDonald’s that stood in the previous place for so many years. It seems much more open and spacious. Large TV screens serve as menu boards with flickering images of succulent poultry and goodness.

Another line and separate menus are available for Fresh-A-Peel. There seemed to be quite a bit of confusion of where people needed to go.

To order, you give your order to a cast member, who then gives you one of those hand-held buzzers like you get at a chain restaurant. So, you could go fill your beverage cup and scope out your table. Or, like a majority of people, just hover around and confuse the people who are trying to find where to order.

Outside, there’s a large bar area. It was the perfect late spring evening so I was surprised more people weren’t staking a claim here. The stone walls make for a very warm, inviting atmosphere.

Back inside, there are several stations where you can fill your soft drinks. Like with all Disney restaurants, Coke is King. But, you also can find Gold Peak iced teas in several varieties. Yay! No more Nestea with the weird sweetened taste! 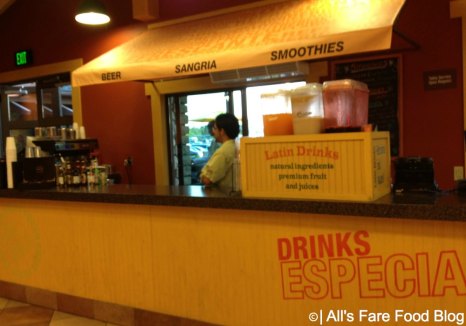 For the adults needing some liberating libations after a day of hectic shopping around Downtown Disney or trekking around the theme parks with kids in tow, you can get sangria, margaritas and other alcoholic beverages to satiate your thirst. 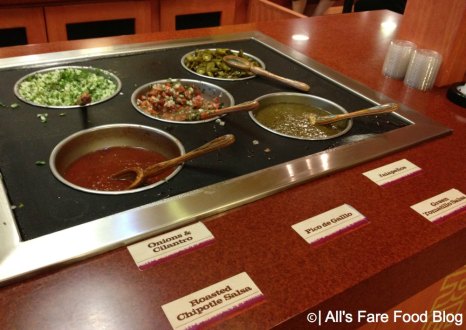 You know how some places have condiment bars with mustard, ketchup, pickles, onions and such? Well, Pollo Campero has a salsa bar. Here, you can find several different varieties to liven up your meal, such as roasted chipotle, the mild pico de gallo and green tomatillo. 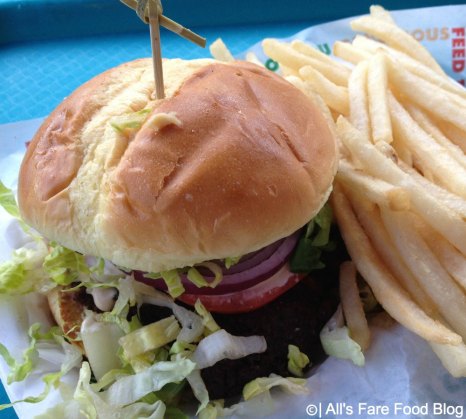 For my meal, I ordered a special burger that Fresh-A-Peel had on the menu – a falafel burger. This hearty patty was made of chick peas and other fresh ingredients. Then, it was set atop a fluffy bun and decked out with lettuce, tomatoes and onions, and served with a side of fries.

This burger was a healthy, yet hefty, alternative to its beefy cousin. While the wait for my meal was upwards of about 20 minutes, the resulting product was well worth it, and the burger plus a regular soda was just over $12.

Oh, before I forget…There’s also the food allergy-friendly Babycakes inside the restaurant. So stop by for some gluten-free, dairy-free, egg-free and vegan cupcakes and desserts once you’re finished with your meal. The NYC-born Babycakes has been highlighted in magazines like “Vogue” and on TV. This is its third location.